Vietnam may have ended one of its longest lockdowns in the pandemic era on Oct. 1, but supply chains are still reeling from the effects.

Four months of increasing restrictions meant to abate a deadly pandemic took a toll on the country’s people, economy, and business partners. Canceled orders and product delays became the norm for U.S. businesses with suppliers in Vietnam, as COVID-19 cases overwhelmed the country. The country has since reopened, but manufacturers are now concerned of a new labor shortage after thousands of migrant workers—many of whom lost their jobs during the lockdowns—left the country once restrictions were lifted.

Here’s a look back at how the restrictions unfolded and the mounting effects on business, in six charts.

1. A rising trading partner for the U.S.
Vietnam is one of the largest exporters of furniture to the U.S., and suppliers in the country also manufacture apparel, electric machinery, semiconductors and rubber products, according to data provided.

This versatility has made Vietnam a leading import partner for the U.S. in Southeast Asia, as companies over the years looked to diversify their sourcing base beyond China.

Vietnam is a key source for products in Asia
Top sourcing regions for U.S. buyers 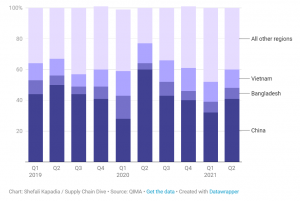 2. A pandemic success story, flipped on its head
Early in the pandemic, Vietnam was regarded as a coronavirus success story.

Strict containment measures and an export boom helped the country’s economy grow by 2.9% in 2020, “one of the highest growth rate in the world,” according to the International Monetary Fund.

But when a new wave of coronavirus struck in May 2021, the story was flipped on its head.

At first, containment measures in the country were meant to be short. Ho Chi Minh City, a manufacturing hub for the country, implemented social distancing measures May 31 that were only meant to last two weeks.

But as COVID-19 cases escalated, so did the shelter-in place restrictions, according to a daily coronavirus tracker in the Vietnam Briefing. Shelter-in-place orders were issued, gatherings were restricted, and factories shut down, all as the government attempted to mitigate the spread of the pandemic.

Less than 3,000 COVID-19 deaths had been reported in Vietnam prior to May 2021. That number has now topped 21,000, according to World Health Organization data. 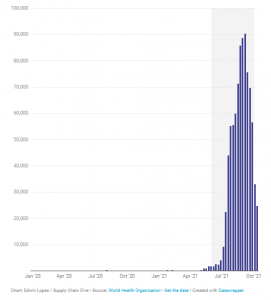 3. COVID-19 cases slow port operations
COVID-19 cases also hit ports in Vietnam, contributing to the decline in exports as shipments were delayed, according to data. Container dwell times rose consistently since August, reaching nearly a week of delays by the time the lockdowns were lifted on Oct. 1.

“Unlike the other ports in US and some ports in China, the Vietnam dwell times and congestion were mainly related to COVID-19 lock downs,” said a director of market & data intelligence, adding the workforce available at Vietnam ports dropped “by about 50%.” 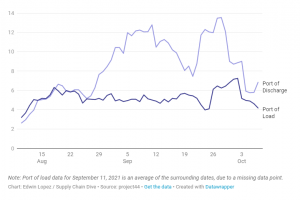 4. Imports plummet due to shutdowns
As factories shut down and manufacturing slowed across the country, exports from Vietnam to the U.S. began to drop as well, the executive vice president of industry and services said in an email. The steepest decline in exports came in September, months after the lockdowns started.

“As for why the volume held throughout July and August and only started to fall in September, we have to account for the delay between manufacturing and shipping.”

“Given the global shipping crisis, it is likely that Vietnamese exports to the United States in July and August were manufactured much earlier in the year.”

After years of growth, Vietnam imports plummet in September
Total imports from Vietnam in TEUs 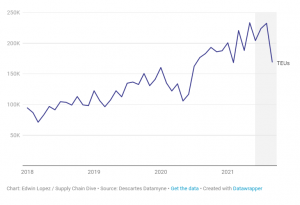 5. Global brands faced elevated risks
The combination of factors affecting shippers’ ability to make and export products affected brands worldwide, though not every product and company was affected equally.

A research was published early October, looking at the potential effect on sales shutdowns in Vietnam could have. As part of that research, analysts at the investment banking looked at specific brands’ exposure to country by measuring the percent of their sourcing base with operations in Vietnam.

As the situation worsened in August and September, a number of companies with high exposure said they expected financial hits in SEC filings as a direct result of the situation in Vietnam.

A CFO of a furniture factory said factory closures were expected to cost the company $60 million in sales “due to receipts [we are] not expecting to get in time for the normal selling season.” 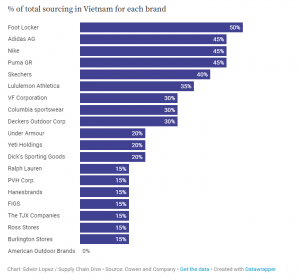 6. Furniture, apparel sellers feel the effects
One of the furniture suppliers specifically called out its furniture product category as an at-risk segment for sales. Furniture is Vietnam’s top export, representing 35% of total TEUs brought into the U.S., and 28% of bills of lading, according to Customs and Border Protection data.

But companies that source other categories are feeling the effects, too.

Apparel imports also cratered in September 2021
U.S. imports from Vietnam since 2019, in TEUs 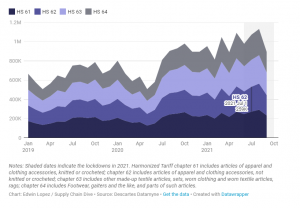 What’s next?
Factories began to reopen as of October, but it may take a while before capacity recovers.

The events of the past months took a significant toll on workers in the country. In the days after restrictions were lifted, Reuters reported thousands of workers left Ho Chi Minh City, where nearly half of the reported COVID-19 cases took place. And now, manufacturers in Vietnam fear additional labor shortages despite a reopened economy.

In its research note, it suggests capacity could normalize anytime between the end of October 2021 (an “optimistic but least realistic view”) and Q1 2022.

Until capacity recovers, companies will continue to face product delays or cancellations.

“Orders are now 8 weeks plus delayed according to our contacts,” the author of the report, said in an email the first week of October. In addition, “vendors are canceling orders the retailers are making.”