Long-dwelling containers in the Port of Long Beach are now up 9% vs. Oct. 28.

The number of container ships waiting off Los Angeles and Long Beach is well off its highs, but the pileup of import containers waiting on Southern California terminal yards is rapidly reapproaching its peak.

Long Beach just crossed a red line. The number of import containers sitting on Long Beach terminals for nine days or more is now higher than it was on Oct. 28, 2021, the date the port first began counting these boxes as part of a plan to reduce them.

Gains from ‘key’ fee plan largely gone
Back in October, the ports of Long Beach and Los Angeles announced a controversial strategy to charge a fee on long-dwelling containers. Or at least, they threatened to charge a fee (it has been delayed ever since).

The Biden administration coordinated with the ports on the plan and touted reductions in long-dwelling containers in its supply chain updates.

On Jan. 20 (after which the administration’s updates ceased), the White House stated, “The proposed fee on containers that sit on the docks for over eight days at the Ports of Los Angeles and Long Beach continues to play a key role in enhancing the fluidity of the ports and … has led to about a 60% reduction in the number of these long-dwelling containers sitting on the docks since Nov. 1.”

That progress has completely evaporated in Long Beach and is close to disappearing in Los Angeles.

Long-dwelling containers pile up in Long Beach
Long Beach had 28,723 containers dwelling nine days or more as of Monday. That’s 9% higher than the total in late October.

Sunday and Monday were the first days the number turned positive since the fee plan was announced. The number of long-dwelling containers jumped by 40% over the past 12 days. On-dock rail containers have largely driven the reversion to October levels. 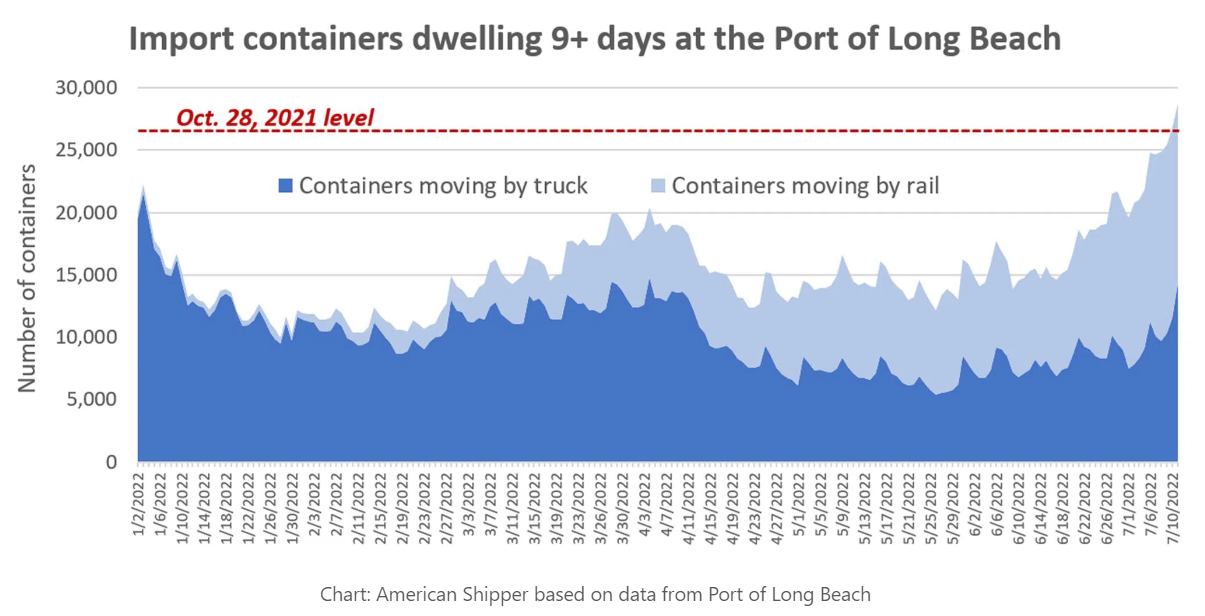 Los Angeles gains dwindling fast
Los Angeles still shows a decline in long-dwelling containers versus the start date it compares to Oct. 24. However, as of Monday, the decline had shrunk to just 9%. There were 33,999 import containers dwelling nine-plus days on the port, up 20% over the past 12 days.

There are now more containers dwelling nine-plus days than boxes sitting in Los Angeles for zero to four days (33,309) and 2.7 times the number sitting for five to eight days (12,421).

The last time Los Angeles’ number of import containers dwelling nine days or more was this high was on Nov. 18.

Altogether, there were 79,729 import containers in Los Angeles on Monday. It hasn’t been this high since Nov. 9, eight months ago.

Data confirms rising dwell times at Southern California’s ports. The dwell time for import containers in the latest week averaged seven days at both ports, up 32% since the first week of May in Los Angeles and up 41% in Long Beach. The last time numbers were this high was in the first week of December.

Will the fee be implemented?
The fee plan, if ever implemented, calls for a charge of $100 per container dwelling for nine days or more, escalating to $100 per day (i.e., $200 on the second day, $300 on the third, etc.), meaning that fees would quickly spiral.

The fee would be charged to the carriers and carriers have stated that they would pass the cost to importers. If the fee were charged on Monday, it would total $6.3 million and balloon each day thereafter.

Every Friday since mid-November, the ports of Los Angeles and Long Beach have issued a joint statement saying the fee has been delayed for another week, citing declines since the plan was announced.

The combined count for both ports still shows a 2% decline versus late October, due to the remaining decline in Los Angeles.

But given current trends, the combined decline could flip to an increase by this Friday. The ports’ ability to point to a combined decline as the reason to delay the fee could expire very soon. (That said, the fee plan requires the approval of the Long Beach and Los Angeles Boards of Harbor Commissioners, and their current approval expires on July 28.)

American Shipper asked the Port of Long Beach if the reversal in the numbers could cause the fee to finally be implemented, and whether it would make sense to do so if the problem is largely being caused by rail issues outside the control of the parties that would be charged.

In a written response, the Port of Long Beach Executive Director said: “Due to backups at key rail yards elsewhere in the U.S., westbound trains have been delayed and rail-bound import cargo here is waiting for that rail equipment to arrive. We’ll be monitoring closely in the weeks ahead.”