The number of ships at anchor, waiting for berth space to open up at America’s two largest boxports has hit a new record today with more than 40 ships now forming queues further and further away from the terminals at Los Angeles and Long Beach.

The extraordinary congestion seen at America’s main two west coast ports is far worse than the port lockout days of 2002 and 2004.

When striking longshoremen repeatedly closed the ports of Los Angeles and Long Beach for 10 days and eight days in 2002 and 2004 respectively, ship queues never exceeded 30 vessels, and yet the the port lockdowns caused significant economic chaos. The situation today is far more grave.

Splash has identified 41 containerships at or near to the San Pedro anchorage awaiting a berth today in a peak season like none other in the 65-year history of containerisation.

The Los Angeles port data for August showed that 90% of vessels headed straight to anchor, joining a queue averaging 7.8 days of anchor time.

A chief shipping economist told Splash: “Shippers, some of which are already low on inventories, are frontloading to secure goods in stock for upcoming key sales seasons such as Black Friday and Christmas.” 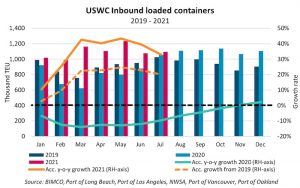 Longshoremen at both ports have been unable to get containers out of the port – loaded inbound as well as empties outbound – fast enough.

As yard density is now quite high, the efficiency of the logistics comes down.

A lack of chassis across the US is also making the line of ships waiting longer.

Retailers in the US are battling record low inventories, likely meaning the container crunch will worsen in the coming weeks.

The inventories to sales ratios show the relationship of the end-of-month values of inventory to the monthly sales. These ratios can be looked at as indications of the number of months of inventory that are on hand in relation to the sales for a month. For example, a ratio of 2.5 would indicate that the retail stores have enough merchandise on hand to cover two and a half months of sales. This ratio currently stands at just 1.08. 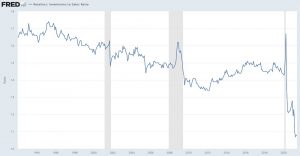 Commenting on this lack of inventory, CEO of New York-based Ocean Audit, wrote on LinkedIn: “This is the reason importers/retailers are paying top dollar for private vessel charters and $15,000 / 40′ space. The reason why little green dots on the satellite show dozens of ocean vessels trying to berth.”

Giving an update on operations earlier in the month, the executive director of the Port of Los Angeles, said the challenge facing the entire supply chain amounts to “squeezing 10 lanes of freeway traffic into five lanes.”

The port boss advised consumers to get their Christmas shopping plans in place far earlier this year or risk having some very disappointed family members come December 25.

The Marine Exchange of Southern California has been forced this month to open drift areas as both the bay’s primary and overflow anchorages are full.

The maps below show the ships at anchor in San Pedro Bay, and at the bottom, courtesy of eeSea, all boxships heading to Los Angeles and Long Beach in the coming 28 days. 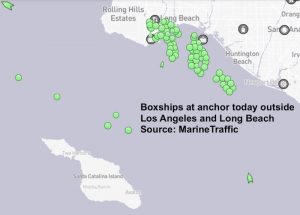