The 2021 Silk Road numbers are there: what do they tell us?

Whereas cargo volumes are often expressed in TEUs, the number of trains is also frequently used to indicate the development of the corridor. In 2021, the number of trains between Europe and China amounted to 15,000, a year-on-year increase of 22 per cent. The reason this growth rate differs from the TEU figure, is because a lot of cargo is bundled and loaded on more than one train throughout the journey.

What do these numbers tell us?
Measuring and comparing volumes on the New Silk Road are always a complex matter, in the first place because there are different sources, reporting different data. The differences between these figures are due to the fact that everyone has a different definition of the New Silk Road.

Whereas some count the numbers on the main route only, others add up all the routes. While China is focused on trains to and from China, you can also consider other destinations. And then there is the question of what you count: TEU’s, the number of trains, cargo in tonnes, only containerised cargo etc.

If you have all these numbers at hand, you want to compare them to illustrate what they indicate but for that, you want to be sure not to compare two different sets of data. In conclusion, it is almost impossible to conclude how successful a year has been, taking into account all these figures.

From a Chinese perspective
This being said, we are choosing to present the numbers of the Chinese authorities in this article, as these are the numbers that have been released. We are first taking a closer look at the cargo measured in TEUs, as this provides a more inclusive image. The year 2021 can be deemed successful with a growth rate of 29 per cent, despite on ongoing pandemic, a stressed supply chain and significant congestion on the New Silk Road.

What is normal?
It is hard to explain these differences without looking at the last ten years. In fact, a doubling of the volumes is not an extreme. Although based on a different set of figures, counting only the volumes on the main route via Belarus, Kazakhstan and Russia, this website concluded in December 2018:

“The total volume of freight traffic transiting via the broad gauge network of Russia, Belarus and Kazakhstan amounted to 245 thousand TEUs in the first eleven months of 2018. This indicates a growth of 58 per cent in comparison to the similar period last year, when this value was 155 thousand TEUs, according to the United Transport and Logistics Company – Eurasian Rail Alliance (UTLC ERA).

Why the sudden drop?
A reason for the sudden drop in growth rate in 2021 can be attributed to the congestion. The pandemic, as 2020 showed, initially boosted rail freight traffic along the corridor rather than disrupting it. Cancellations in ocean freight and border closures in road freight resulted in a clear shift to rail. The pandemic has actually had a positive effect on Eurasian rail freight.

However, this success has led to limited capacity, which, coupled with additional border checks to prevent the coronavirus from spreading, led to port congestion in 2021. When asked what characterised 2021 to attendees of the European Silk Road Summit in December 2021, the word that came up most was congestion. The New Silk Road was suffering from its own success.

Capacity expansion
Luckily, there are many projects ongoing to improve the situation. In the same year report of the China National Railway Group, it mentioned that it had approved “the implementation of the capacity expansion and reconstruction projects of Alashankou, Khorgos, Manzhouli, Erlian and other port stations.

“Harbin, Hohhot and Urumqi Bureau have steadily advanced the capacity expansion and reconstruction projects. In 2021, the two ports of Khorgos and Erlian gained new capacity, which will have a significant incremental effect. Alashankou and Manzhouli port stations are expected to complete capacity expansion and reconstruction in the first half of this year.

Khorgos most dominant border point
What is also interesting to see is the shift in volumes from one border gate to another. In 2021, the border point of Khorgos gained significant volumes, becoming the main port of entry or exit for China. Previously, this was Alashankou. In 2021, 5,848 China-Europe trains were operated via Alashankou, while 6,362 China-Europe trains were handled at Khorgos.

The two other entry points situated in Inner Mongolia are Erenhot and Manzhouli. As of December 16, a total of 2,605 China-Europe trains had been handled at Erenhot railway port. In Manzhouli, this number was 4,235 China-Europe trains for all of 2021. Interestingly, this was mainly eastbound traffic. According to the Chinese authority, 2021 was the first year in which the number of inbound trains exceeded that of outbound trains.

Since August 2018 there is a 5th port taken in consideration by the Chinese railway company. The Suifenhe Railway Port became operative that year, for cargo that exits or enters via the Russian Far East ports. The volumes really took off in 2021, when 549 China-Europe trains were handled at this port. The total number of trains since the opening is now 903, with the majority being handled in 2021. 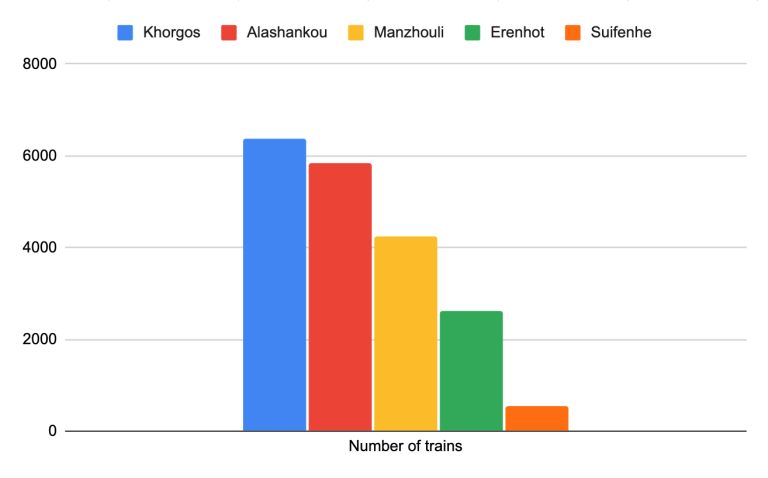