The first phase of Tuas Port was officially opened on Thursday – with 500 workers running three berths at what will eventually be the world’s biggest fully automated port.

At the opening, Prime Minister said the port will be a critical engine driving Singapore’s economy, reinforcing its status as an international maritime centre.

“Our decision to press on with Tuas Port sends a strong signal to the world that Singapore is open for business… We are going full steam ahead,” he said.

Meanwhile, port operator PSA described the $20 billion facility as a game changer. PSA’s group chairman said: “Today marks the exciting beginning of a new era. Tuas Port is where we can help to realise the immense potential of Singapore as a trade hub for the world.”

PM who was given a tour of the megaport, said Tuas has an advantage in being closer to the many industries in western Singapore, including the nearby Jurong Innovation District, the Jurong Lake District and the Jurong and Tuas industrial areas.

“Being closer to the port means faster and cheaper port services,” he said. “This means more efficient production, and quicker turnaround for their products to be exported to international markets.”

Through the use of artificial intelligence and machine learning, Tuas Port will also assure international partners and shipping lines that Singapore can handle the increasingly complex operations of the future, PM said.

He added that the port was creating more opportunities and better jobs for workers.

Containers at the port are transported around the facility in unmanned driverless vehicles once they are set in place by cranes.

Tuas Port will be opened in four phases. When completed sometime after 2040, operations at Singapore’s other ports – Keppel, Brani, Pasir Panjang and Tanjong Pagar – will be consolidated there.

It will have a handling capacity of 65 million twenty-foot equivalent units (TEUs), a one-third increase from Singapore’s current capacity.

Although Tuas Port was opened officially only on Thursday, two berths were opened in September last year to help increase Singapore’s storage capacity during the supply chain crisis.

A total of five berths should be in operation by the year-end. In the next two decades, the new port is expected to create thousands more jobs for the maritime sector, which is now enjoying a boom, with freight volumes at record-high levels.

The country’s first container port was planned in 1966 in Tanjong Pagar, before any shipping lines in Asia had committed to building container ships to move goods between Europe and Asia.

The first container vessel it received, the MV Nihon, in 1972, carried just 300 containers. Today’s largest container ship can carry about 24,000.

CIMB economist said Tuas Port indicates Singapore’s intention to stay a major hub for the supply of many kinds of goods and services.

It works in tandem with the airport, he said, and the two should be closely integrated for the economy to benefit through greater trade.

“There needs to be faster and faster connection between air and sea ports. It’s about the whole economy benefiting from the greater trade volumes handled.” 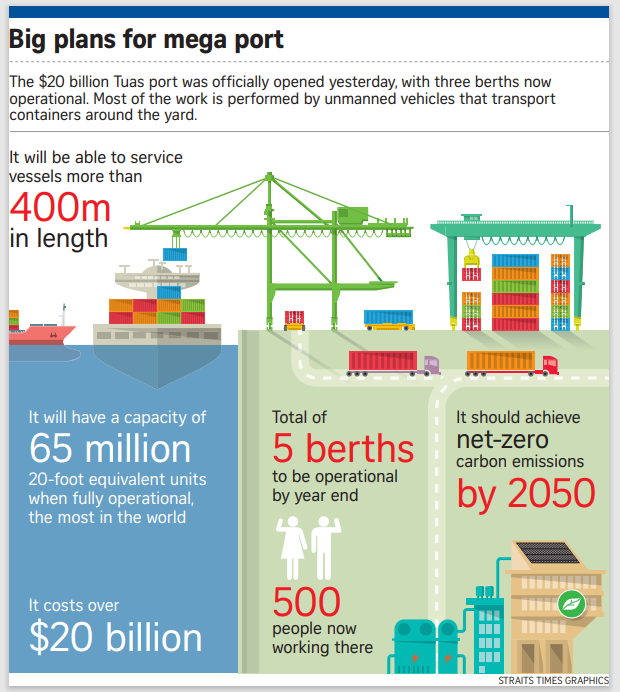 Another Covid surge in China is the global supply chain’s biggest fear, but it may be overstated