US west coast container ports appear to be making significant progress towards easing congestion of loaded and empty containers, and retail shelves and warehouses are currently close to pre-pandemic stock levels, according to analysis by the White House.

But the White House briefing questioned the size and power of container shipping alliances, called for greater funding for and oversight from the US maritime regulator the Federal Maritime Commission (FMC), and said that “reforms to our shipping laws would help further improve our ability to get goods in and out of this country more quickly and cost effectively”.

In an update this week on progress in dealing with recent supply chain blockages, the White House noted: “Earlier this month, we announced that we would, twice a month, track how well our nation’s transportation and logistics supply chain is handling the increase in demand for goods as we recover from the pandemic. With the data for the full month of October now in, we continue to see the goods movement supply chain moving more goods than ever before, goods reaching stores, and the velocity of goods leaving the Ports of Los Angeles and Long Beach increasing.” 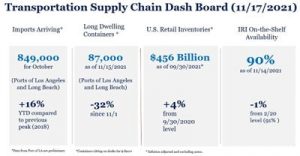 Tracking progress at ports
It highlighted that earlier this week, the Ports of Los Angeles and Long Beach offered preliminary estimates of 849,000 loaded containers imported in October. “This brings the total number of containers they have imported between January and October to 8.6 million, which is 16% more than their previous record over the same period in 2018.

The ports also reduced the number of containers sitting on the docks for more than 9 days by about one-third (32%) over the first two weeks of November,” the White House commented.

“We continue to monitor the ability of the goods movement supply chain to get goods from the ports to store shelves. Census data, specifically inflation-adjusted retail inventories without autos, show that the value of the goods on retailers’ store shelves and in their warehouses grew between the end of September and the end of October and is now 1% above its pre-pandemic level. Higher frequency data from IRI show that the share of consumer-packaged goods that are in stock was 90% last week, just one percentage point below its pre-pandemic level.”

Inventories are higher than last year, and that they are seeing containers moving at night at the ports of Los Angeles and Long Beach.

Walmart said it “had more products flowing through its supply chain than during the same period last year when pandemic demand for some products strained supply. Its US inventory rose 11.5% in the quarter,” the White House reported.

Reducing congestion to increase speed
It said the reduction in long-dwelling containers was due, in part, to a new congestion fee the ports imposed on ocean carriers, adding: “The carriers have been so successful at clearing the docks that the ports announced this week they would postpone charging the fee. Reducing the number of containers sitting at the port improves overall efficiency by creating more space for containers to be unloaded more quickly and giving trucks more room to manoeuvre.”

But it stressed that the docks are not just full of loaded containers, with “thousands of empty containers remain on the docks as well, often sitting on chassis. Without these chassis, trucks are unable to remove containers from the docks, and a shortage of chassis has contributed to the increase in dwell times at the ports.

“The ocean carriers have now agreed to clear more of these empties from the docks faster, including bringing in vessels dedicated to empty removal. Based on these new commitments, they have already cleared out 60,000 containers (measured in TEUs), with commitments to remove another 28,000,” the White House noted. 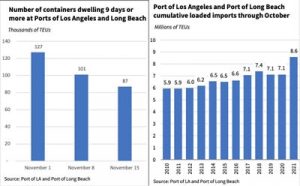 Restoring balance at ports
The White House also highlighted the recent problems with US exports, noting that although agricultural exports from ports are up 6% compared to the same period last year, when measured by weight, roughly one-quarter of agricultural exports by the ship that moves by a container has seen those volumes fall by 2% this year.

“Our work to reduce congestion at the Port of Savannah – the top containerized agricultural export port in the country by a number of containers – should help improve the flow of agricultural exports,” the White House claimed. “With five pop-up container yards located throughout the Southeast, farmers will have more ways to get commodities via truck or rail to this critical port.”

But it continued: “More work is still needed, however, to improve exports out of the nation’s ports. The rise in the cost of shipping between Asia and the West Coast has meant that it is more profitable for the ocean carriers to quickly load empty containers or return without a full ship instead of waiting for loaded containers to get into the port. The share of exported containers at the two ports that are empty has risen from around 55% in the five years preceding the pandemic to over 70% so far this year.”

It said this problem “is affecting more businesses than just farms and raises questions about the fair treatment of American exporters and importers in the shipping industry”, questioning whether container shipping alliances have contributed to the problems and whether they now have too much power.

“Today a system of global alliances dominates global shipping where nine carriers that have been organized into three alliances control about 80% of the global shipping market, and 95% on the critical East-West trade lanes. Alliances only controlled 29% of the market as recently as 2011,” the White House noted.

“This lack of competition leaves American businesses at the mercy of just three alliances. Retailers are charged fees for their containers remaining on the docks, even if there is no way to move their containers. If the alliances decide to not accept exports, agricultural exporters will not be able to fulfill their contracts, and farmers’ perishable products may be left to rot.

“In July, the President called attention to these problems in his Executive Order on Promoting Competition in the American Economy, which encouraged the Federal Maritime Commission to vigorously enforce the prohibition against ocean carriers charging unfair fees to exporters and importers. The Federal Maritime Commission, which has jurisdiction to regulate the carriers, should use all of the tools at its disposal to ensure free and fair competition. It has already launched an inquiry into excessive shipping fees that are charged when the importer or exporter cannot plausibly move the container.”

The White House continued: “The FMC should consider using its other tools, too. For example, while the alliances between the carriers receive statutory immunity from antitrust laws, the FMC can challenge those agreements if they ‘produce an unreasonable reduction in transportation service or an unreasonable increase in transportation cost or … substantially lessen competition.

“The Justice Department stands ready to lend the FMC its expertise and support. In fact, the two agencies have already increased their collaboration, which is part of the ‘whole of government’ approach to promoting competition launched by the Executive Order on Competition.”

It continued: “Congress should take action here as well. The FMC needs more resources to oversee an industry with the size and scope of global shipping. Its annual budget is just around $30 million. Current laws also do not require even basic transparency in this sector.

“For example, there is no public reporting of the detention and demurrage fees carriers are charging their customers. Moreover, Congress should provide the FMC with an updated toolbox to protect exporters, importers, and consumers from unfair practices. There is bipartisan support for doing this, including a bipartisan bill. Their proposed legislation includes good first steps towards the type of longer-term reform to shipping laws that would strengthen America’s global competitiveness.”

The White House briefing concluded: “We look forward to working with members of both parties in Congress to ensure that we have a system of maritime regulation that boosts instead of reduces American competitiveness for both importers and exporters. That would complement the bipartisan infrastructure deal that the President signed into law this week, which is one step in the President’s broader strategy to build a more durable industrial strategy that will bolster America’s global economic competitiveness.

“Reforms to our shipping laws would help further improve our ability to get goods in and out of this country more quickly and cost-effectively, and strengthen opportunities for US businesses to connect with global markets.”

_tip: how to improve your customer experience and internal operations?

Are shipping’s carbon regulations a problem or an opportunity in disguise?